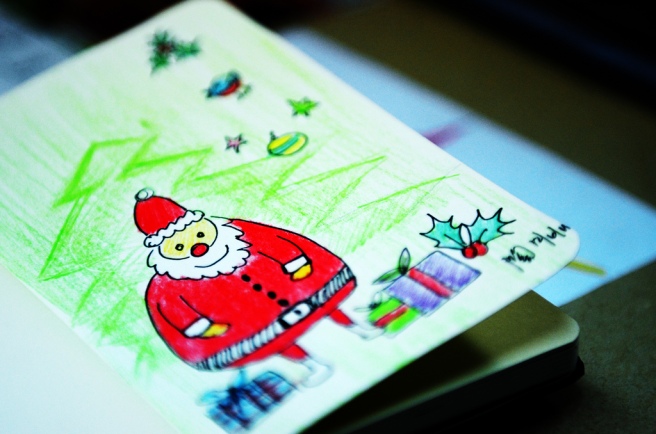 Christmas was approaching. Excitement building. At first the children spoke in hushed whispers, but as the day came closer their voices grew louder. Eventually they were shouting in hysterics “Santa is coming! Santa is coming!”

I wrote about lying to children in my last post. Well the biggest lie of all is Santa. And as Christmas approached it was my biggest problem.

Pity. That’s what I feel for any white male who works in a Korean hagwon at Christmas. Why? Because there’s a very definite possibility that you will find yourself tasked with being Santa. In a school filled with Korean women, the white guy becomes Santa by default.

If he doesn’t want to be Santa – tough shit. He has no choice. Actually, in my case, I wasn’t even asked. My school decided to have a Christmas party. Christmas was only the subtext, naturally. The real reason for the party was to get all the parents into one room. Then butter them up by showing them their children doing cute shit while of course speaking English.

The first time I heard about being Santa was when a party schedule appeared on the wall of our teacher’s office. I read down the list and there at the bottom in big bold writing was:

As I scrolled my eyes along the schedule I wondered what poor schmuck would have to be Santa. Then I saw the big bold words:

There was a twinge of anxiety. Still, at that point it was November. I put Santa to the back of my mind, pointless to worry about something so far away.

Children would skip over to me and ask “Daniel Teacher, is Santa really coming to the Christmas party?!?” I would cringe inside but outwardly I would smile. “Of course he is!”

I started to ask the children about their previous Santa experiences. He’d visited the year before apparently. Some were adamant that it wasn’t the real Santa. Just John Teacher – the teacher I had replaced – dressed in a suit.

One girl told me “Santa looks like John Teacher. Big and fat with a beard.” I pressed her for more info. “So is John Teacher actually Santa?” She looked at me as though I was crazy, “No! Santa is Santa.”

The week before becoming Santa, the weight of expectation grew heavy on my shoulders. I considered throwing myself down some stairs. If I broke my leg accidentally then I wouldn’t have to be Santa. I kept picturing myself as Santa in a terrible cheap suit. Children pulling my beard down in front of a room filled with Korean parents.

Worse, I imagined the disappointment. My children had been so excited about Santa for weeks, how could I in any way compare to the perfect Santa they had envisioned in their heads? I would never be able to reach Santa perfection and they would be so sad.

The effect of all of this research was the same effect as when you start to Google for illnesses. I just felt worse. I’m about as far away from Santa as humanly possible. For a start I’m so skinny that i could be considered malnourished. No belly in sight. I’m quiet and shy away from social situations. I hate crowded, noisy rooms. I am not jolly, I am a misery guts whose sole satisfaction in life comes from trying to get through it while enjoying it as little as possible. To top it all off, I have a distinct Northern England accent, hard to mask.

Reading tips online only enforced the idea that I would never be a good Santa. I pictured the sad, disappointed faces of my students and started to dread the party which kept getting closer and closer and closer.

Eventually the day arrived. Unfortunately I wasn’t run over by a car on my walk to school. When I arrived my headteacher took me to one side. “There’s a big bag of gifts hidden in the teachers room. When it comes to the end of the night, sneak upstairs and put your costume on. Come down and wait in the doorway to the hall. When I make the announcement, come in. Just hand out the presents and ask the kids some questions, then we’ll take photos with the families.” It all sounded so simple.

Soon it was time for me to sneak upstairs and don my suit. By this point the adrenaline kicked in. There was no escaping the situation now. My heart was beating fast. My palms were sweaty. In 10 minutes I would be standing in front of dozens of Korean families. Waving and shouting, “HO! HO! HO!” I’d been practicing my HO-HOing around the house for weeks and I knew I was a useless HOer. This was not going to be good.

I pulled on the trousers first. Then the jacket. Both were too big for me. I looked like a fat man who had just beaten cancer. Next came the hat. Then came the final piece of the Santa puzzle–the large white beard.

Nowhere to be seen.

My search continued. By this point I was simply looking in places I had already looked. My irrational mind was clinging to the hope that I’d simply not seen it. Open. Close. Open. Close. All along my heart beating louder and louder. Baddum. Baddum. Baddum. Every moment another thought of my impending Santa based doom etching its way into my head.

Eventually I gave up and headed back to my sack full of gifts. Resigned to my humiliation. I looked in the bag and there in the top was another beard. I wanted to cry with joy. Instead I carefully pulled the second beard on. Looking in the mirror, I realised I was a shoddy Santa. Still, I was determined to give it my best shot, even if I would have to go through years of therapy due to post-traumatic stress.

Just then I heard the door to the floor open. I looked out and standing there in the doorway was one of my students. He stared at me for a moment, completely still, shocked

We stared back and forth at each other for a moment until I decided to give it a shot. I gave a wave. “Hello!” I growled in my best deep voice. Instantly he started laughing, he pointed at me. “DANIEL TEACHER! DANIEL TEACHER!” his lack of English meant he pretty much had nothing else to say on the matter only “DANIEL TEACHER!”

I smiled at him from beneath my beard. “No, no, no! Santa Teacher!”

Eventually they got bored and ran downstairs. Soon, I followed them and waited in the doorway as my headteacher spoke to the crowd in Korean. Between me and her was a room filled with Korean parents, grandparents, babies and every student from our hagwon. I could feel the hair of the beard in my mouth and it was starting to choke me.

Beneath the suit I was sweating profusely. I wondered how I had got myself into this situation. Then the announcement came. Everybody clapped. I strode confidently into the room, sack across my back, one hand waving.

Reaching the front the headteacher pushed a microphone into my face. Everybody went silent in anticipation. She whispered to me, “Say something.” The silence went on forever. I had forgotten what Santa says. What does he say again? Cherry Mistmas? No that’s not it. Hoppy Halidays? Shit! No!

The headteacher looked like she was about to die. No doubt she was thinking that the Christmas party was about to become a disaster and all of the parents would take their children to another hagwon immediately.

Then my brain clicked and I shouted jovially. “MERRRRRRRRRRRY CHRISTMASSSSSSS!” The families clapped, some laughed. The microphone was thrust back into my face as the room quietened.

What the fuck, I have to say MORE?! Wasn’t that enough. I decided to opt for the old classic: “HO! HO! HOOOOOOO!” More applause, more laughter. With a crowd this easy, this might not be so bad, I thought.

My confidence had all of a sudden grown. For a moment I considered doing a little dance, but then I thought better of it. Then I heard a child shout, “IT’S DANIEL TEACHER!” and that confidence was instantly torpedoed.

A chair appeared for me to sit at and the children were led up with their families one by one. “Have you been a good boy?” I would ask in my terrible gruff voice. They would reply back, get a present, then we’d take photos with the family. From time to time a child would come up and say “DANIEL TEACHER!” loudly. My only reply was to go “HO! HO! HO!” or say “NO! SANTA TEACHER!”

Eventually one boy got a little too excited. He started to pull on the beard. I grimaced as I pictured the elastic snapping, followed by my pale face being revealed.

The boy laughed sadistically, I couldn’t exactly shout at him in front of everybody and he knew it. Subtley I put my hand on his present and I whispered “I think you’ve been a bad boy. Maybe I should take this back.” Instantly he froze and apologised. Don’t mess with Santa, you little poop.

My pile of presents decreased quickly, each family coming up and taking an awkward photo with me. One child came up and looked petrified, it was the girl who told me that Santa looked like John Teacher. She was clearly very confused. Another girl, a 4 year old, immediately burst into tears. A boy came over to her and tried to reason with her, he pointed at me. “Daniel Teacher!”

Finally it was all over. I ran from the room as quick as humanly possible with another shout of “MERRY CHRISTMAS!” Made my way upstairs. Removed the costume. Scratched my face which had been itching uncomfortably. Then I quickly went back downstairs to the party.

A group of children pounced on me as soon as I entered. “Daniel Teacher is Santa.” I looked at them with faux-confusion. “What are you talking about? I’m not Santa.” They were unconvinced. I on the other handwas convinced of one thing.

I will never be Santa again.

My name is Dan. That's about all I'm sure of. View all posts by DJ Baird